Closed escrow sales of existing, single-family detached homes in California totaled a seasonally adjusted annualized rate of 396,440 units in September, according to information collected by C.A.R. from more than 90 local REALTOR® associations and MLSs statewide.  Sales in September inched up 0.4 percent from a revised 394,700 in August and were down 4.2 percent from 413,850 in September 2013.  September marked the 11th straight month that sales were below the 400,000 level and the 14th straight month that sales have declined on a year-over-year basis.  The

I read a great article from the New York Times, that talks about one of the oldsest questions in real estate, and one I get asked a lot.  I realize our market in Orange County and especially the hyper local real estate market in Fullerton and Placentia are extra sensitive.  If you are thinking about buying and wondering if the time is right for you.  Send me an email and we can talk about your situation, and see if it makes money sence to BUY or RENT.

The choice between buying a home and renting one is among the biggest financial decisions that many adults make. But the costs of buying are more varied and complicated than for renting, making it hard to tell which is a better deal. To help you answer this question, our

On a busy stretch of Sherman Way in Van Nuys, a red and black sign advertises a rare commodity in Los Angeles.

The 63 houses — "small lot" townhouses that sit less than six inches apart — are unusual in a region with few new houses selling for less than $500,000, and even fewer anywhere near Hollywood.

New home prices have soared in recent months, with the median for the six-county region peaking at $538,000 in June, according to CoreLogic DataQuick. In Orange County, the median new home price has topped $800,000.

A surge in higher-end projects has pushed new home prices above their pre-recession peaks, even as prices for existing homes remain one-fifth below their bubble-era highs. 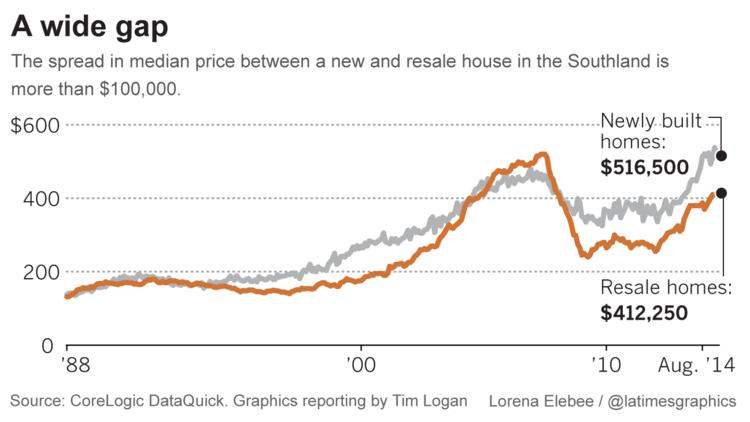 …
Read Full Post »
Mortgage giants Fannie Mae and Freddie Mac , their regulator and lenders are close to an agreement that could greatly expand mortgage credit while helping lenders protect themselves from charges of making bad loans, according to people familiar with the matter.

Fannie Mae and Freddie Mac have recouped tens of billions of dollars in penalties from lenders in recent years over claims that the lenders made underwriting mistakes on loans they sold to the mortgage giants. Lenders have blamed those penalties for tight credit conditions and for prompting them to make loans only to borrowers with near-pristine credit.

If the agreement is completed, lenders may be more willing to lend to borrowers with lower credit scores and smaller down payments.

How can homeowners buy a replacement house before selling their present home? When a person who wants to purchase another house, using the proceeds from the sale of their existing house, they have to make an offer with the condition that their present home has to be sold first, hence the CONTINGENT OFFER.

When the seller accepts an offer contingent on the buyers selling their home, typically he gives the buyers 30 days to get a buyer for their house. The seller, however, keeps his house on the open market, even though he accepted the contingent offer. If the seller gets another offer that is non-contingent, (the buyer does not have a house to sell) the seller can accept it and give the first offer a 72 hour time limit to come up with a different type of

…
Read Full Post »
With more available homes on the market for sale, California’s housing market will see fewer investors and a return to traditional home buyers as home sales rise modestly and prices flatten out in 2015, according to the CALIFORNIA ASSOCIATION OF REALTORS®’ (C.A.R.) “2015 California Housing Market Forecast,” released today.

“Stringent underwriting guidelines and double-digit home price increases over the past two years have significantly impacted housing affordability in California,

Condo price gains outpaced single-family price gains in 18 of the largest 20 condo markets, according to Trulia.

Overall asking prices increased in 92 of the largest 100 metros in the U.S., with several Southern metros taking the lead. In fact, five of the top 10 metros with the largest price gains over the year in September are located in the South. Miami topped the list with a 14 percent price gain.